'The following page is a footnote, created to explain the science/supernatural phenomena/other details seen in the series, The Knights of the Multiverse.'

This page is an explanation of the types of robots that are featured in The Knights of the Multiverse, particularly those featured on Earth Prime.

Typically, most robots in this series fall under two categories:

"Mecha" or "mech suit" is the term given to giant robots on Earth Prime, even the ones from other dimensions. They are typically almost as tall as skyscrapers, sometimes even bigger, and house an enormous arsenal, usually consisting of lasers, missiles and bladed weaponry like swords & axes. Unless its a mass-produced type of robot, or are supposed to be similar like with Mazinger Z and Great Mazinger, each has their own unique skill sets. Mechs that are used by hero-type pilots are classified as "Super Robots". Some mech suits are even programmed with a type of Artificial Intelligence, though it is a very rare case. Unique to mechs in this series, the ones with mouths are able to move them in perfect synchronization with their pilots' voice, and the ones with masks (particularly the ones with segments in the middle) light up when their pilot speaks. Mech suits typically fall under three different variants:

A surprisingly rare case on EP, androids are robots that are about as tall as humans. They can either look just like a normal human (sometimes with a different colored artificial skin), or at least have a vaguely humanoid appearance. Most on Earth Prime are capable of showing human emotions thanks to that world's mastery of creating Artificial Intelligence, a special program that allow machines to think and feel for themselves, even developing their own personalities. Like mech suits, EP's androids come in two distinct variants:

Other Types of Robots Edit

Cybertronians like Starscream hail from the planet Cybertron and have the unique ability to change their shape (or transform) into a variety of shapes like cars and jets. Certain Transformers are also able to combine with Mini-Cons, a small, human-sized race of Cybertronians that were created to serve as worker units, to gain new powers or hidden weapons.

The robots that hail from the planet Chronos like Jet and Drill are a very unique case. Like Earth Prime, they come in two versions: human-type robots (with human-like faces and wearing armor) and more standard-looking robots that can convert in to vehicles, like Cybertronians. However, both types of robots are actually human-sized.

Raideen, a robot able to transform into a giant, mechanical bird

Getter Dragon, the base form of the combiner, Getter Robo G 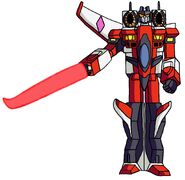 Jet, a transforming robot from Chronos
Add a photo to this gallery
Retrieved from "https://knights-of-the-multiverse.fandom.com/wiki/Robots?oldid=5327"
Community content is available under CC-BY-SA unless otherwise noted.