Kotetsu (Steel) Jeeg, or simply Jeeg, is the titular robot of Kotetsu Jeeg and is a Super Robot in The Knights of the Multiverse, introduced in Season1. It is formed from Hiroshi Shiba, who transforms into its head, then combines with parts that fire from the Glomar's Big Shooters. It's also quite possibly the smallest Super Robot in the series, but it has more than enough punch to make up for that.

Jeeg is able to fire two laser beams from his eyes.

Jeeg can launch both of its forearms forward similarly to a standard Rocket Punch attack, both capable of piercing directly through most weaker metals.

Jeeg clasps its hands together and launches them at its opponent.

Jeeg fires a black electrical blast from the hole in its stomach that spirals forward, completely piercing through its opponent, tearing them to shreds.

An electrical magnet in the abdomen that sucks enemies toward him.

Jeeg grabs its enemy with both arms and begins to destabilize their atomic structure in the form of a bear hug, eventually crushing it and reducing them to dust.

A pair of large drills used to replace Jeeg's arms that allow it to fly at super sonic speeds. These drills can be launched while in midair and, if both are used, Jeeg will hover back to the ground.

A large cannon that connects to one of Jeeg's forearms.

Combo attack w/ Mazinger Z, Getter Robo G, Daimos, Daitarn 3 & Raideen (also occasionally Govarian and Great Mazinger): Daimos kicks it off by sending their enemy into the air with a Fire Blizzard. When it's fully ascended into the air, Mazinger and Jeeg hammer it with their Breast Fire and Spin Storm. Dragon comes in for the final blow with a Shine Spark. When Daitarn 3 & Raideen join later on, the two assist in the finishing blow by having Daitarn hold the opponent in place with a Sun Attack right after being lifted into the air by the Double Blizzard. Then, Raideen fires a God Arrow, which pierces the opponent's chest and acts like a honing rod for the Shine Spark. Other ARC Super Robots Govarian and Great Mazinger can also join in on the attack, with Govarian joining with Mazinger Z to create a Double Burning Fire, and Great energizes Raideen's arrow with a Thunder Break, causing even more damage. 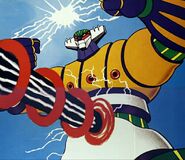 Mach Drill
Add a photo to this gallery

Taking some inspiration from its appearance in Kotetsushin Jeeg, Jeeg has pupils in its eyes, to make it seem more alive than most of the other mechs seen in the series since, technically, it's Hiroshi in a larger form.

Retrieved from "https://knights-of-the-multiverse.fandom.com/wiki/Jeeg?oldid=8703"
Community content is available under CC-BY-SA unless otherwise noted.