Guild of the Multiverse

Epsilon is a character from Astro Boy (2003) and is a reoccurring character in The Knights of the Multiverse, introduced in Season 1. She's an android created by Dr. Grey of L.O.V.E.M.U.F.F.I.N. to act as an assistant of sort and raise her ultimate weapon, her "little sister" Atros.

Even with her mother treating her like dirt for all of her life, Epsilon is very a gentle and caring automaton, being open to all living creatures, whether they be human, robot or animal, especially sea-life. She believes in peace and doesn't enjoy fighting against humans or androids. But when duty calls, she'll still fight as fiercely as any other fighter, showing great feats of bravery and courage towards any opponent, especially if it's to protect her little sister or someone else she's grown to care about, willing to lay down her life to protect them. She has a great bond with marine animals, which she cares for greatly. However, this can backfire when fighting an opponent underwater, as her wanting to get the local marine life to safety can cause her to forget about her current mission.

Epsilon was originally created to be Grey's weapon of mass destruction, but when she was activated, she didn't want to fight, so Grey just demoted her to the role of a maiden, cleaning up after her experiments. During this time, she developed her love for the sea and underwater life.

When Grey's first "successful" battle android, Atros, was created, she assigned Iris to take care of her new weapon while she handled other plans for the organization and to observe her movements/keep in contact at all times.

Epsilon has a pair of wings that can extend from her back that allow her to fly great distances. They are also able to propel her underwater.

At first, it seemed that Epsilon didn't have any special powers, aside from her wings and the typical android super-strength and advanced intelligence. However, after it was revealed that she was a battle-type android, she was revealed to actually have a good selection of weapons:

Her most notable ability, Epsilon is equipped with a high-frequency weather detection device installed in her electronic brain that can detect weather patterns and even ocean currents.

Epsilon is capable of communicating with all marine wildlife, which she can summon at great distances. She's also able to summon them to aid her in a fight, though this is more like her encouraging and compelling the subject rather than asserting full control. She's also been shown to be able to communicate with some Kaiju.

Epsilon is able to extend a pair of daggers from the sides of her hands for offensive attacks.

Epsilon is able to fire a Photon Beam from her head crest that can pierce through most normal android armor and can, at best, phase through some mech armors. She can even convert some of her energy into an even stronger laser beam. She can also use this ability to generate a large burst of energy that can create winds strong enough to stop tornadoes.

Epsilon and her "mother" have never been on good terms, with Gray treating her like nothing more than a servant than as her daughter. Heck, when Atros was born, she just gave Iris the job of helping her develop just so she could focus on other projects.

Epsilon loves Atros a great deal, giving her all the love and attention that their mother never gave them. Even if she didn't return her kindness at first, all she wants for her is to be happy and eventually be free from their mother's control, and she's content knowing that she might be left behind. She also tries to teach about taking a less violent approach at life, and will often comfort her when their mother is too harsh on her for failing a mission or disobeying her orders.

Even before she met her, Epsilon already had Usagi in her good graces for being Atros's first true friend (even if Atros was too proud to say it).

Epsilon and Agnes are very good friends, both relating to their stories of being big sisters and for wanting to distance themselves from their creators' violent intentions.

When Epsilon joined the team, she and Lapis quickly bonded over their affirmation for the sea.

Even if she was made from the same blueprints as Atros, Epsilon could never consider such a heartless monster as Sigma her little sister. 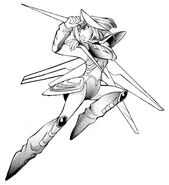 Epsilon with her daggers
Add a photo to this gallery

Epsilon and Atros's relationship is based off of Atlas & Livian from the 1980 Astro Boy series, another pair of robots treated terribly by their creator but find sanctuary in each other. Of course here, it's moreso a simple sibling love, whereas Atlas and Livian eventually developed romantic feelings towards one another, especially after being rebuilt into adult forms.

Retrieved from "https://knights-of-the-multiverse.fandom.com/wiki/Epsilon?oldid=8055"
Community content is available under CC-BY-SA unless otherwise noted.