The Allied Robot Corps is a team that existed about a decade prior to the events of The Knights of the Multiverse. Acting as Earth Prime's version of The Justice League, the team comprised of the planet's mightiest (human) warriors.

Many of them were destroyed in the final battle with the Mycenae Empire, and are all resting in The Graveyard of Giants, but statues of them (and the survivors that continue to fight against the forces of evil to this day) were erected in the Super Robot Memorial Museum.

These are other robots that appeared alongside the main cast during the events of the Imperial Wars.

Samurai-type sword. Also has a scabbard.

Shield that stores the sword

A large metal boomerang that can double as a melee weapon.

A large spiked ball attached to a chain that serves as a ranged melee weapon.

A shield made in the shape of a mammoth's head. Can fire energy beams from its eyes

Lightning that fires from the horn.

Finishing move. A series of yellow energy slashes from the Great King Sword

A heavily-armed/armored black and yellow mecha able to transform into a jet fighter.

A flying punch attack it performs after jumping into air.

Shield that holds the sword.

Finishing Move it performs after jumping into the air.

A beam that fires from the jewel in its chest

A space-themed Super Robot that can transform into a space shuttle, and its head can become a smaller space craft.

A shield formed from the wings of one of Great Five's components. Also stores the sword.

A pair of laser handguns

A Super Robot made up of racing cars.

Finishing Move. RV Robo charges towards its opponent and performs a spinning slash.

A Super Robot made up of five fighter jets and has two robot modes, known as the Beta form (Blue) and the Alpha form (Red)

A Super Robot made up of several land vehicles.

Finishing move where it skates forward on it wheeled feet and performs an energized, underhanded lateral slash.

Guns on each forearm which can fire either energy blasts or extinguishing foam.

A pair of extendable arms that can fire multiple rapid-punches and can extend & spin its opponent around, similar to the Daisetsuzan Oroshi performed by Getter Three.

For the most part, mech pilots mostly worked separately form each other, with the only exception being when the mech itself was controlled by a group of pilots, such as the Combattler team. That all changed the day the Mycenae Empire rose up from their underground ruins to retake the surface world. With most of the Kajiu held on Monster Island, the ancient empire became the planet's greatest threat, with them destroying several key cities mere minutes upon their arrival. With Mazinger Z defeated and Great Mazinger being unleashed to tackle the threat, a flurry of heroes piloting mechs came up through the woodwork to fight off this new evil, including the veteran Battle Team and Combattler V. Even the Getter Team was called in to tackle the threat every now and then while the Dinosaur Empire rose up to attack (no relation between the two empires, was just inconvenient timing). 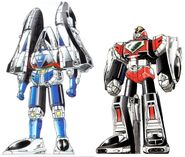 Victory Robo
Add a photo to this gallery

The team's name is taken from the group of the same name from the Getter Robo Go manga. You can see information on this team here.

The team is completely made up of classic super robots from around the 1970's era (or, at the very least, the ones worth mentioning). As should be obvious to most fans of Power Rangers, the other Robots seen in the ARC are robots from early Super Sentai shows. However, to fit them a little closer to mechs such as the Mazingers, Jeeg and Daimos, the ones featured come from shows that came before the turn of the century, minus the animal-themed ones. (Also, most of them are never seen transforming or separating into their individual parts, so that part is left up to interpretation.)

Retrieved from "https://knights-of-the-multiverse.fandom.com/wiki/Allied_Robot_Corps?oldid=8809"
Community content is available under CC-BY-SA unless otherwise noted.